It is with a heavy heart that I am announcing my departure from Purple Frog Systems. It has been just shy of 2 wonderful years with the Shropshire based company, but it is now time to move on to pastures new.

I joined Purple Frog Systems in March 2016 following an intense round of interviews with the lovely husband and wife team (Alex and Hollie Whittles). We discussed our favourite Star Wars film, my grumpy tendencies and how I felt about the colour purple! After clearing up the important stuff, we looked at a few SSIS packages, then argued about if comma’s should appear at the start or end of fields in your SELECT statement list, they should be at the end! Later we unanimously concluded that we were right for each other, even though the comma thing remains unresolved.

From day 1 Alex was an excellent mentor, opening many doors and gifting me many opportunities for development. It can sometimes be difficult in a small company where no task is too menial and wearing the hats of the marketing department, cleaner and project manager are common place, as well as your day job. But I feel together we made it work and my contributions in the Azure Data Platform space have grown the reputation of the frog pond significantly. Maybe, even into a frog data lake! 🙂

Having risen through the ranks at Purple Frog (pond scum > tadpole > frog) I now find myself at the door step of a new consultancy, Adatis, ready to start the next chapter of my career. I confess a mixture of emotions as with all big decisions, but I know deep down this move is right for me. On Friday 2nd March 2018 I’ll officially become a Senior Data Analytics Consultant at Adatis ready to start my first week in my new job by flying over to Seattle for the MVP Summit! Immediately following by SQL Saturday Iceland. Not a bad start.

That said, my involvement our thriving data platform community we remain unchanged. I’ll still be organising, speaking, blogging and helping-out wherever the call takes me. I could never leave the #SQLFamily behind regardless of any professional movements. 🙂

Good bye Frogs, may our paths cross again in the future. 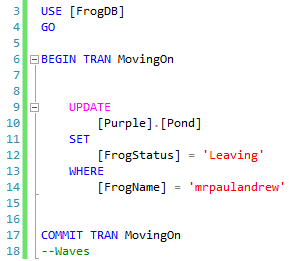 One thought on “Moving On”

This site uses Akismet to reduce spam. Learn how your comment data is processed.

Who do I work for?

My Top 10 Most Viewed Blog Posts