This open source code project delivers a simple metadata driven processing framework for Azure Data Factory (ADF). The framework is made possible by coupling ADF with an Azure SQL Database that houses execution stage and pipeline information that is later called using an Azure Functions App. The parent/child metadata structure firstly allows stages of dependencies to be executed in sequence. Then secondly, all pipelines within a stage to be executed in parallel offering scaled out control flows where no inter-dependencies exist.

The framework is designed to integrate with any existing Data Factory solution by making the lowest level executor a stand alone Worker pipeline that is wrapped in a higher level of controlled (sequential) dependencies. This level of abstraction means operationally nothing about the monitoring of orchestration processes is hidden in multiple levels of dynamic activity calls. Instead, everything from the processing pipeline doing the work (the Worker) can be inspected using out-of-the-box ADF features.

This framework can also be used in any Azure Tenant and allow the creation of complex control flows across multiple Data Factory resources by connecting Service Principal details through metadata to targeted Subscriptions > Resource Groups > Data Factory’s and Pipelines, this offers very granular administration over data processing components in a given environment.

Thank you for visiting, details on the latest framework release can be found below.

A small release to include some minor enhancements to the processing framework. Specifically:

Issue #32 – Add support for an execution precursor to allow for custom control over the metadata database as part of an execution run. This as been added to help environments that require Worker pipelines to be executed at different intervals/frequencies. The precursor can help you control this by enabling/disabling Worker pipelines using some custom logic. Or do anything to the metadata at runtime using your custom database objects.

Issue #22 – Include a PowerShell script to scrap and prepopulate the metadata for an existing Data Factory of Worker pipelines. 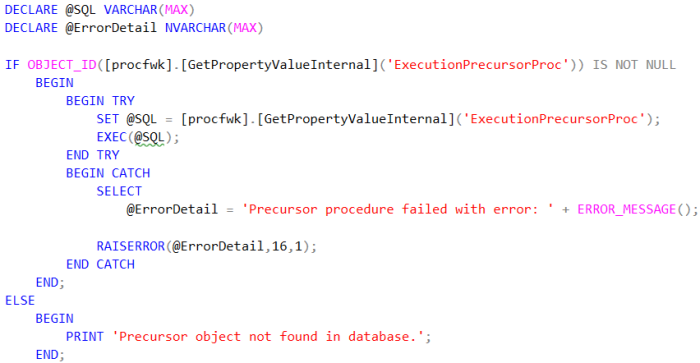 From a framework trigger perspective hopefully this will allow a lot more flexiblity for Worker pipelines that need to be called on different schedules. But without needing to completely rebuild a scheduling system into the metadata. That said, I’d be happy to include a simple date dimension to support any precursor logic if valuable.

Only one new Activity has been added to Data Factory to support the new precursor behaviour. This exists at the very start of the Parent pipeline and calls the stored procedure [procfwk].[ExecutePrecursorProcedure] detailed above.

Through our great community contributors a new PowerShell script has been added to the Procfwk repository by Kamil Nowinski (@NowinskiK).

This script is intended to help out new users of the Procfwk by prepopulating the database metadata tables for a given Data Factory. Using the parameters provided to the script a list of existing Worker pipelines can be returned and using the new stored procedure [procfwkHelpers].[AddPipelineViaPowerShell] added to the metadata helping to get started with a Procfwk execution.

The procedure sets all Workers to a single execution stage called ‘PoShAdded’ which you may want to refine to make best use of Worker dependency chain. However, its a starting point to defining your framework metadata and to get going with the solution when retro fitting this to your existing Data Factory instances.

That concludes the release notes for this version of ADF.procfwk.

Please reach out if you have any questions or want help updating your implementation from the previous release.

This site uses Akismet to reduce spam. Learn how your comment data is processed.

Who do I work for?

My Top 10 Most Viewed Blog Posts